A Near Forgotten Author : Will Lillibridge 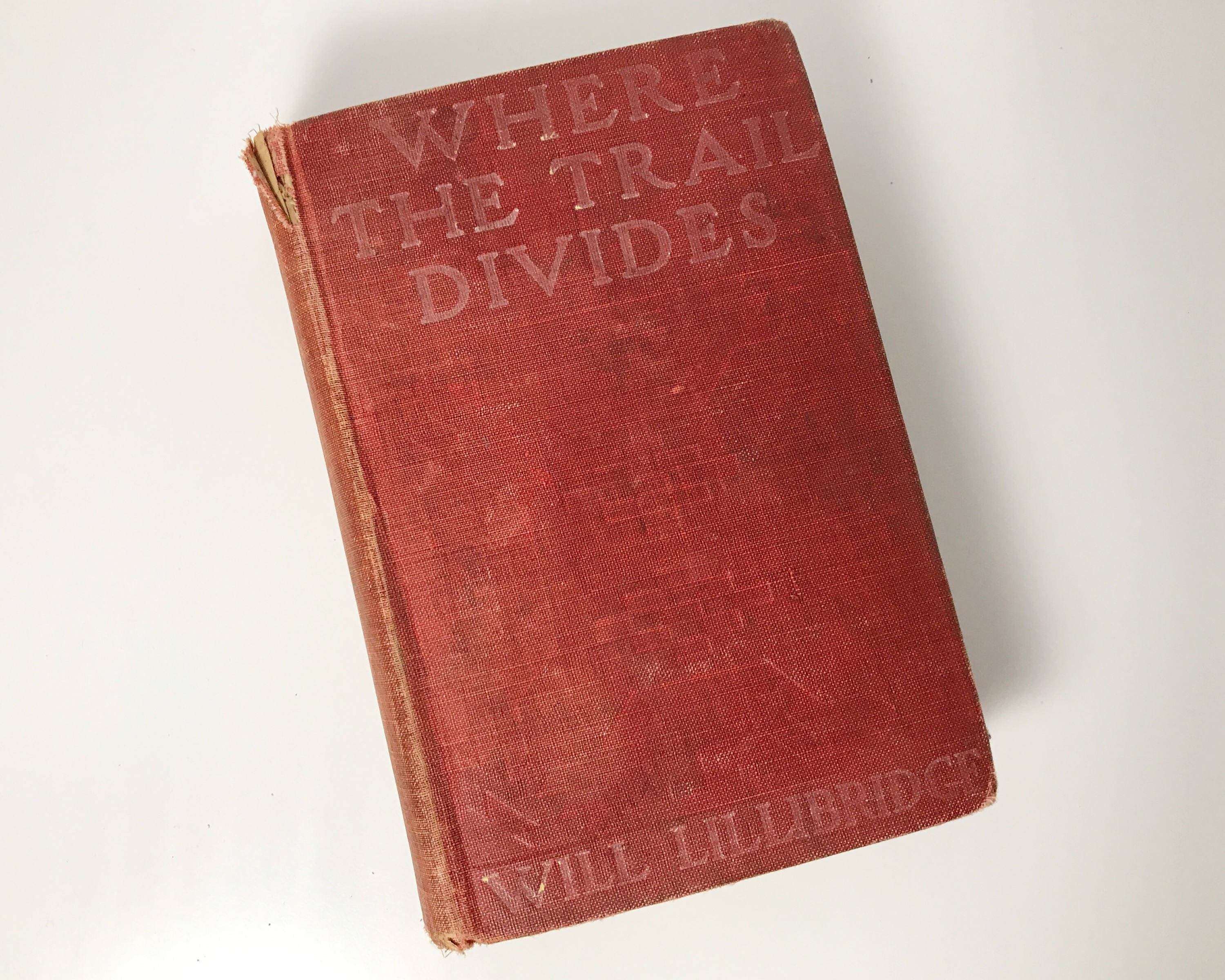 When I find 'new' antique and vintage books to add to my shop I like to research them. I like to stand out by giving people a real chance to know, not only what the book looks like, but what they might expect to find inside. I check out my online sources not just for comparable value, but who was the author? What kind of books did they write. Sometimes there is very little to find. 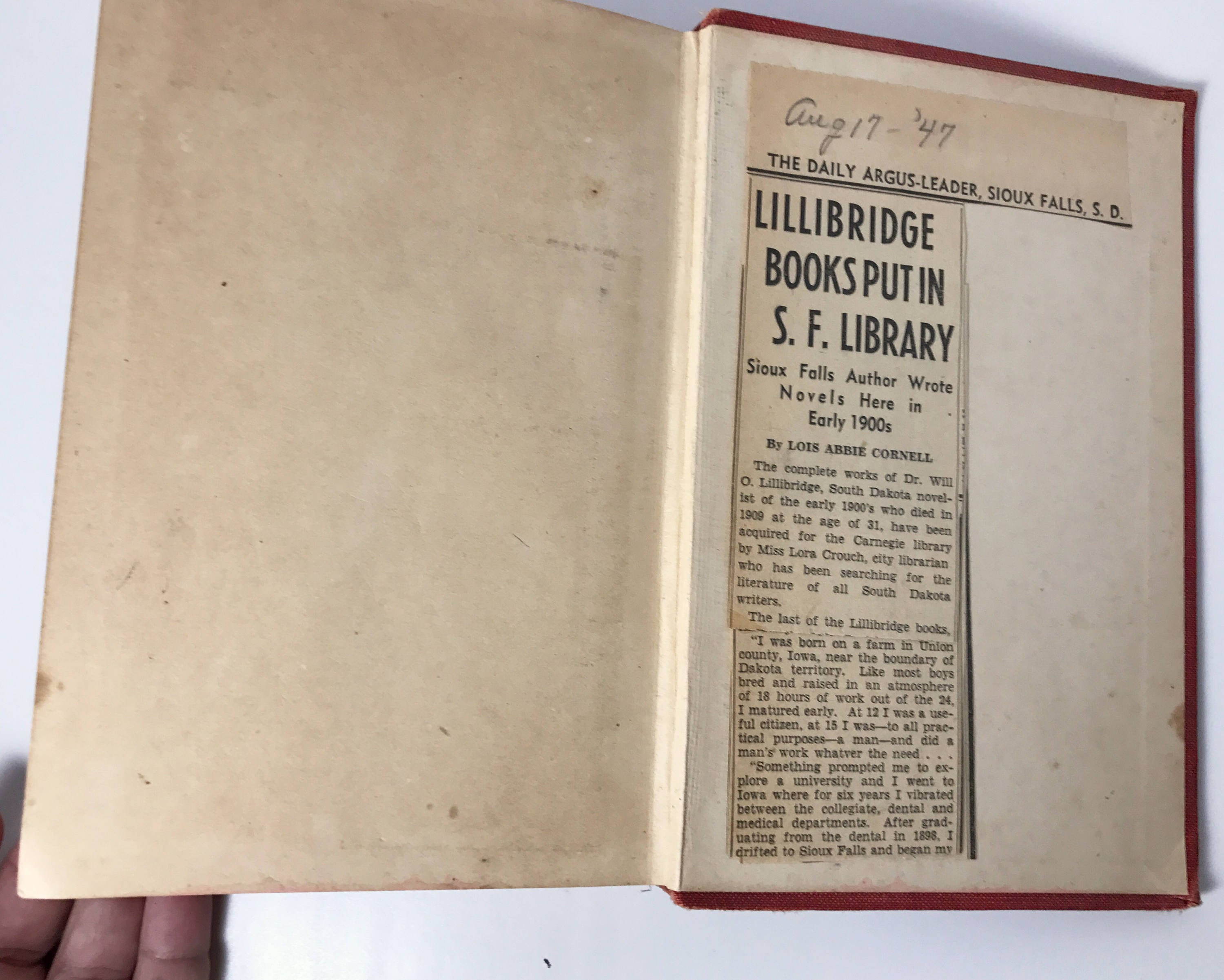 That is why I was so surprised when I was adding "Where the Trail Divides" by Will Lillibridge. There were very scarce details about the author online, and he warranted no wiki page, and yet his books were once so popular that two of them were made into movies. My surprise turned out to  be a carefully saved newspaper clipping taped into the back cover of the book talking the acquisition of the author's books for the Sioux Falls Library. Because there is so little online about this once popular author (I credit the fact that he died young), I have transposed the entire clipping for my blog, so that others might be able to learn about this interesting writer:

The complete works of Dr. Will O. Lillibridge, South Dakota novelist of the early 1900’s who died in 1909 at the age of 31, have been acquired for the Carnegie library by Miss Lora Crouch, city librarian who has been searching for the literature of all South Dakota writers.The last of the Lillibridge books, “A Breath of the Prairie and Other Stories,” (a collection of shorts) was found in the South Dakota collection of H. E. Beebe of Ipswich and purchased by Miss Crouch, making the group of five novels and a technical treatise on Dentistry, complete.“A Breath of the Prairie” was edited and published posthumously by his wife, Edith Kellar Lillibridge, a talented Sioux Falls musician, the daughter of Dr. and Mrs. S. A. Kellar in 1911. In the preface to the work, she pays tribute to the author and observes with a touch of irony: “Every novel may have a happy ending, but a real life story bas but one inevitable ending – death.”

The life of the young author she adds, was a story that is characteristically told in a brief autobiography which he wrote for a magazine not long before his death. He tells his story simply:“I was born on a farm in Union County, Iowa, near the boundary of Dakota territory. Like most boys bred and raised in an atmosphere of 18 hours of work out of the 24 I matured early. At 12 I was a useful citizen, at 15 I was – to all practical purposes – a man – and did a man’s work whatever the need…Something prompted me to explore a university and I went to Iowa where for six years I vibrated between the collegiate dental and medical departments. After graduating from the dental in 1898, I drifted to Sioux Falls and began my profession…Work? My writing is done entirely at night. The waiting room (he calls it his plum tree), requires vigorous shaking in the daytime. After dinner I have a den – telephone proof, piano proof (Mrs. Lillibridge is a professional pianist) and,” he adds humorously, “friend proof!”

Of his recreational hours, the author comments that “once each year the Lady and I go away somewhere for a time, and forget it entirely. In this way we’ve been able to travel a bit, steal an hour or two, drive, keeping with the speed laws when necessary.”Once each fall, when the frost shrivels the corn stalk and when the author heard “a way up over head, invisible, and the accelerating, throbbing, diminishing purr of wings that drives the sportsman mad” – and the town knew him no more.Although Dr. Lillibridge was devoted to an outdoor life, to which he confesses on every occasion in his autobiography, his appearance was that of an ascetic. He was quiet manner that bespoke an inner life which his immediate companions did not touch.

He was a familiar and striking figure in the environs of the old Minnehaha block where his office was located.  On summer days he was attired in white linen and natty straw sailor; in winter his tweeds, immaculate, the very personification of his hero De Young in “The Stuff of Heroes”; or Stephen Armstrong in his novel, “The Dominant Dollar.” Or during the hunting season, in hunting togs for he loved the fields, the prairies and the autumn season sports.He died at his home in Sioux Falls in January, 1909 and it fell to the lot of “The Lady” to write finis across the pages had left unfinished. Five novels, the first “Ben Blair;” later “Where the Trail Divides,” which today would be considered a western; “The Dissolving Circle,” “The Quest Eternal” the setting of which is Sioux Falls, and “The Dominant Dollar.”

Only one of the books has a whimsical touch, the story of a tree in the Ozarks. In the eight years’ time the writer had created a wide interest in his “best sellers.”And as “The Lady” wrote across the final page: ….you who know his prairie tales must have read between the lines – ….unless he loved the honk of the wild geese how could he write, “to those who have heard it year after year, it is the sweetest most insistent music. It is the spirit of the world, of magnificent distances, of freedom…”The Lillibridge collection includes romance and adventure, and the city library is especially building up a large collection of the works of South Dakota writers, Miss Crouch announced.