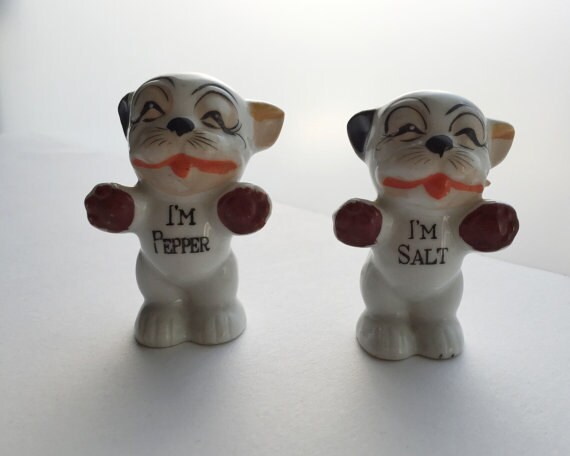 One of the big stars of the 1920s was a cute, porky, little white dog with one black ear, and a more than passing resemblance to a fat bulldog puppy, called Bonzo. At the height of his popularity a breeder even tried to reproduce the dog as a proper breed, but no such luck. Bonzo was the creation of a British commercial artist by the name of George E. Studdy – and he took the world by storm throughout the twenties, appearing in sketches, short films, and spawning a huge amount of merchandise.

I first discovered Bonzo in the eighties when I was living in England and learned about the Bonzo Dog Doo Dah Band – a wonderfully eccentric English comedy band that used Bonzo in their band name, and some of Studdy’s illustrations on their album covers. My mother has a little set of Bonzo Dog salt and pepper shakers on her windowsill in her kitchen, made in Japan in the twenties. Which is why I was pretty excited when I found a pristine set. The Bonzo image was licensed out all over the place, but it’s pretty funny that it was so successful a design that the Japanese potteries kept churning them out for years after Bonzo lost his popularity, and each year away from source, they got less and less like the original so that after a while they were more like a sketch!

Previous Post The White House, San Francisco
Next Post Will the Real Brown Betty Please Stand Up?
0 items in your cart