The Charm of the Vintage Movie Magazine 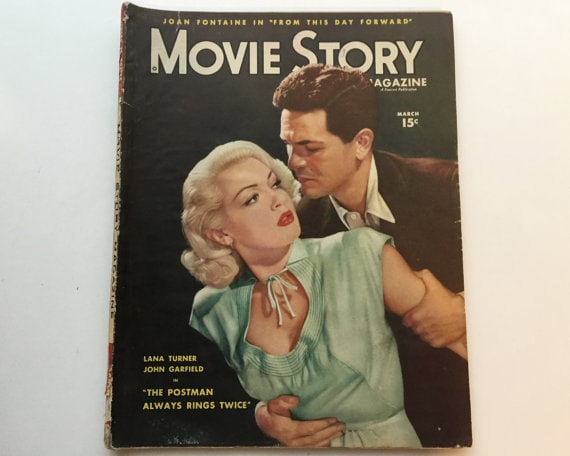 I love classic movies. When I was a kid in the late sixties and early seventies I would curl up in my father’s big Lazy Boy chair and watch the movie channel on TV, back when it was all free, and they would play movie after movie: My Man Godfrey, Laura, The Ghost and Mrs. Muir, Rebecca, Philadelphia Story, and so many more. At Halloween, it was Godzilla, and of course, King Kong. For Christmas, it was Miracle on 34th Street and It’s a Wonderful Life. I loved to watch Fred Astaire and Ginger Rogers dance. While other kids were watching more contemporary fare I was swooning over Clark Gable in Gone with the Wind, and singing at the top of my lungs with Judy Garland.    Somehow, over the years, these movies have receded into the past for me, and my viewing has been filled up with modern movies filled with state of the art special effects, or gripping TV series. I hadn’t lost the love, but it was harder to find the old movies, and there was so much to tempt me away. Then one day, while scouring a flea market for treasures for my online vintage store, I stumbled across a stack of old movie magazines from the thirties and forties. Immediately recognizing the iconic and dramatic features of Marlene Dietrich and the cool classic beauty of Ingrid Bergman, I snatched them up. Once again, my heart beat with the love of the Silver Screen as I started, gingerly, to skim these rare beauties. So many stars I had forgotten, either bit players in movies I loved, or stars of classics – memories were ignited, and a desire to once again enjoy these legendary classics. Oh look – there is Fred McMurray in Double Indemnity (who could forget that Noir gem starring the indomitable Barbara Stanwyck and Edgar G. Robinson)!

My new trove of movie magazines, a little battered with age, are somewhat rare because sadly many of these beauties were either thrown out with the trash long ago, or more recently mutilated for their colorful covers. Researching the different titles turned out to be tricky as apparently, there were once dozens of these magazines, and some of them have very little information available on them. More famous titles feature the gossip of acid-tongued Louella Parsons, gorgon queen of the movie gossip industry, who with her rival Hedda Hopper, could make or break a movie star’s career.

Movie magazines were of two main types: the story book and the gossip book (or an amalgamation of the two). The story book featured short stories based on the new movies out with a ton of juicy movie stills while the other type featured movie news, gossip, and fashion spreads of the stars. Both types are resplendent with vintage ads of the era – some of my favorites being the movie ads.

Who are your favorite stars of the Silver Screen? What movies do you treasure most?

Previous Post Will the Real Brown Betty Please Stand Up?
Next Post Depression Glass
0 items in your cart