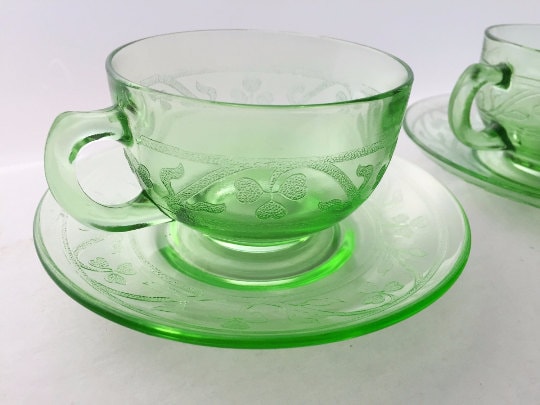 I once read that the Great Depression of the 1930s was named ‘depression’ to avoid calling it the more scary ‘recession’ – of course the depression of the thirties turned out to be so devastating that in 2008 we reverted to ‘recession’ once again to stave off the panic that calling it ‘depression’ could cause. And back in the thirties it was a hard time indeed with millions and millions out of work, banks collapsed, and even industry stopped in its tracks. Yet people still earned a living all across the United States, and people still ate – and still needed plates. Innovative and resilient American glass companies survived the Great Depression by churning out massive quantities of cheap but attractive glassware to match the dwindling budgets of their customers. In fact glass manufacturing was the earliest industry in America. Sadly these great American glass companies didn’t make it to the Great Recession of the 2000s. Pretty much all of them closed their doors, one by one, unable to compete with changing taste and cheap imports.

Ironically American glass is widely collected today, and in particular what is known as ‘Depression Glass’ – glass that was once given away with cereal, or at gas stations, or purchased with trading stamps. Depression glass, by its nature, was cheaply made. If you examine a typical piece of Depression glass you’ll find bubbles, or other imperfections. Yet the beauty of the glass colors and patterns retains its allure, even while the glass passes from hand to hand decade to decade. I possess, and use, an incredibly delicate set of pink Dogwood pattern plates by Macbeth Evans glass made in the thirties, and while I would never put them in the dishwasher, I am constantly amazed by their longevity and resilience – much like the American people during the period in which they were crafted.    When you look around the internet today you’ll find a lot of glass labeled ‘depression glass’ and not all of it is true depression era glass. The three categories of glass patterns by American glass companies that fall under that umbrella term are: 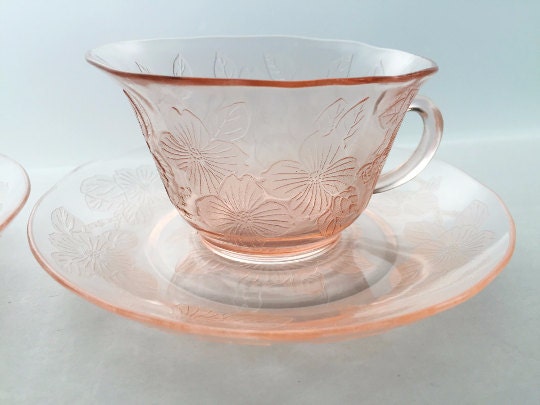 Glass made cheaply in vast quantities during the thirties into the forties like Dogwood by Macbeth Evans, Block Optic by Anchor Glass (later Anchor Hocking), Ribbon by Hazel Atlas, and Cherry Blossom by Jeannette Glass, to name a very few. They come in a diversity of patterns from plain, to pressed glass, to etched glass.

What is termed ‘elegant glass’ is usually made during the same period of the depression era but is fancier and better quality from glass companies like Fostoria, Cambridge, Heisey and Tiffin. There are companies that straddle the line between the two like New Martinsville Glass (later Viking). Between the two, depression and elegant, the main difference seems to be the quality of the craftsmanship. Elegant glass was not given away at gas stations, and still involved an element of human touch in the manufacture.

GLASS OF THE FIFTIES AND SIXTIES:

Some of the same lines made during the depression era lasted for decades, and some of those glass companies made similar patterns later on that are often collected as ‘depression glass’ even if they are not technically that old. If you are only interested in true depression era glass it pays to do a little research before believing all the claims you see on the internet. For instance many Anchor Hocking glass patterns are called Depression glass, and were made much later.