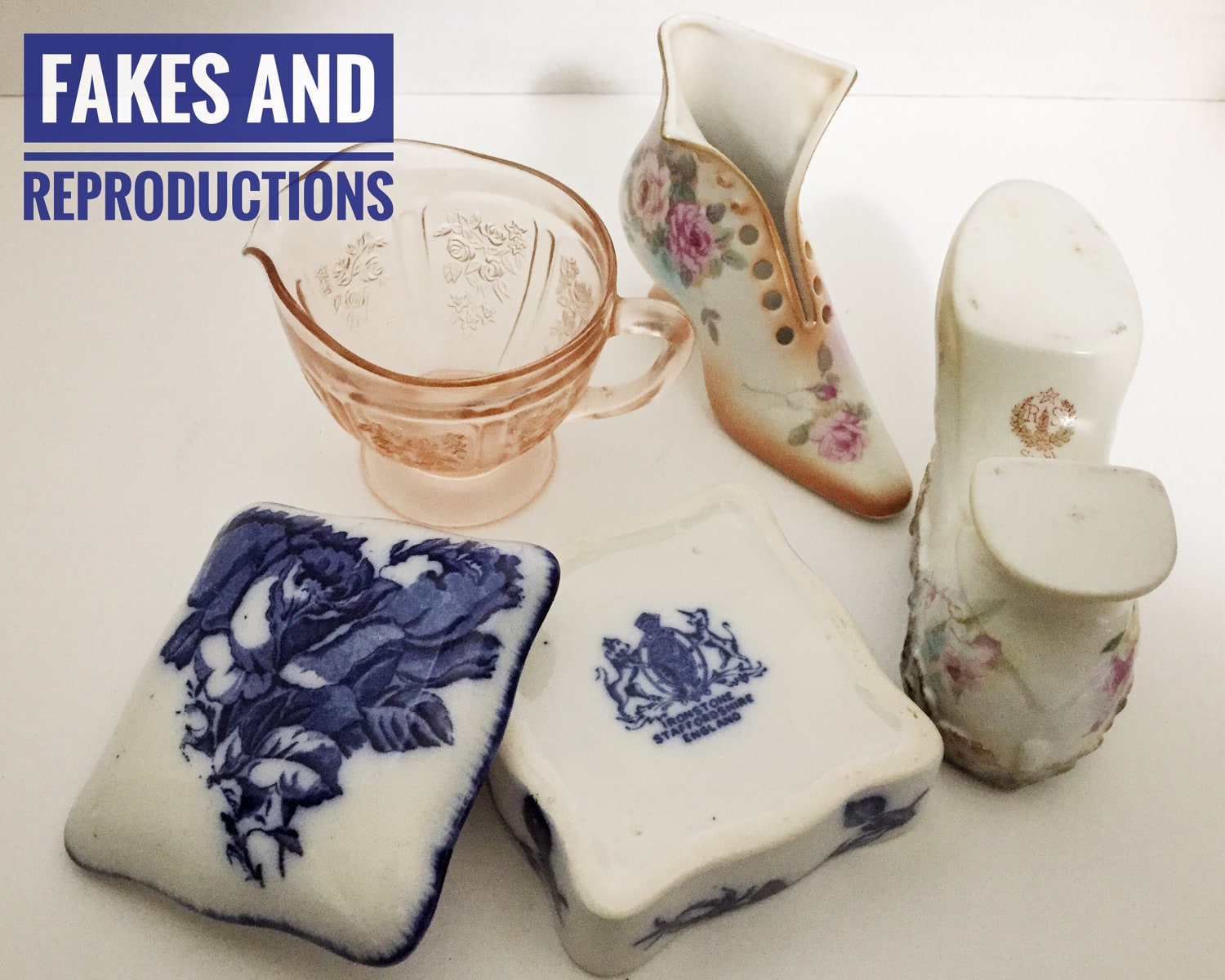 When we think of fakes and forgeries in antiques and art our minds might immediately think of big figures and high stakes like forging a Van Gogh, or incredibly expensive antique furniture that is well over 300 years old. However that is only the ‘glamorous’ side of fakes. I’ve been selling vintage and antiques online for less than a year (though my history with the business goes back further), and already I have encountered (and fallen for) my share of vintage fakes and reproductions.

I have a reproduction pink depression glass creamer in the Sharon or Cabbage rose pattern. The original was made by Federal Glass in the thirties, but fakes have been flooding the market for decades – so long, in fact, that some of the reproductions can be deemed as vintage themselves. The sugar and creamer (I have the creamer) were made in Taiwan in the seventies. Originally they were imported with “Made in Taiwan” stickers, but now you just have to know the difference. In the case of the Sharon creamer it’s the mold line on the spout. In the original Federal Glass version it was dead center. It’s not centered on my creamer.

A Federal Glass creamer usually will run you about $25. Seems like a waste of time to ‘fake’ something like that, but I guess making a cheap reproduction of a coveted piece is all about quantity, not about quality. The original makers and importers have already made their money, but what happens now, forty years later? Well these pieces keep getting passed off as the real thing, either through ignorance, or sometimes through intent. I bought the creamer for $4 at a flea market so I doubt anyone was trying to pull the wool over my eyes. I thought it was the real thing and I was pretty excited. A nice profit to be made! If I hadn’t done sufficient research it might be for sale in my shop now. However I like to do my research, and it was quickly apparent to me that I had bought the repro, and not the genuine article. There are a number of glass patterns where reproductions are made in all honesty, like Indiana Glass reissuing their old patterns in new colors, but even genuine reproductions can cause the collector confusion. 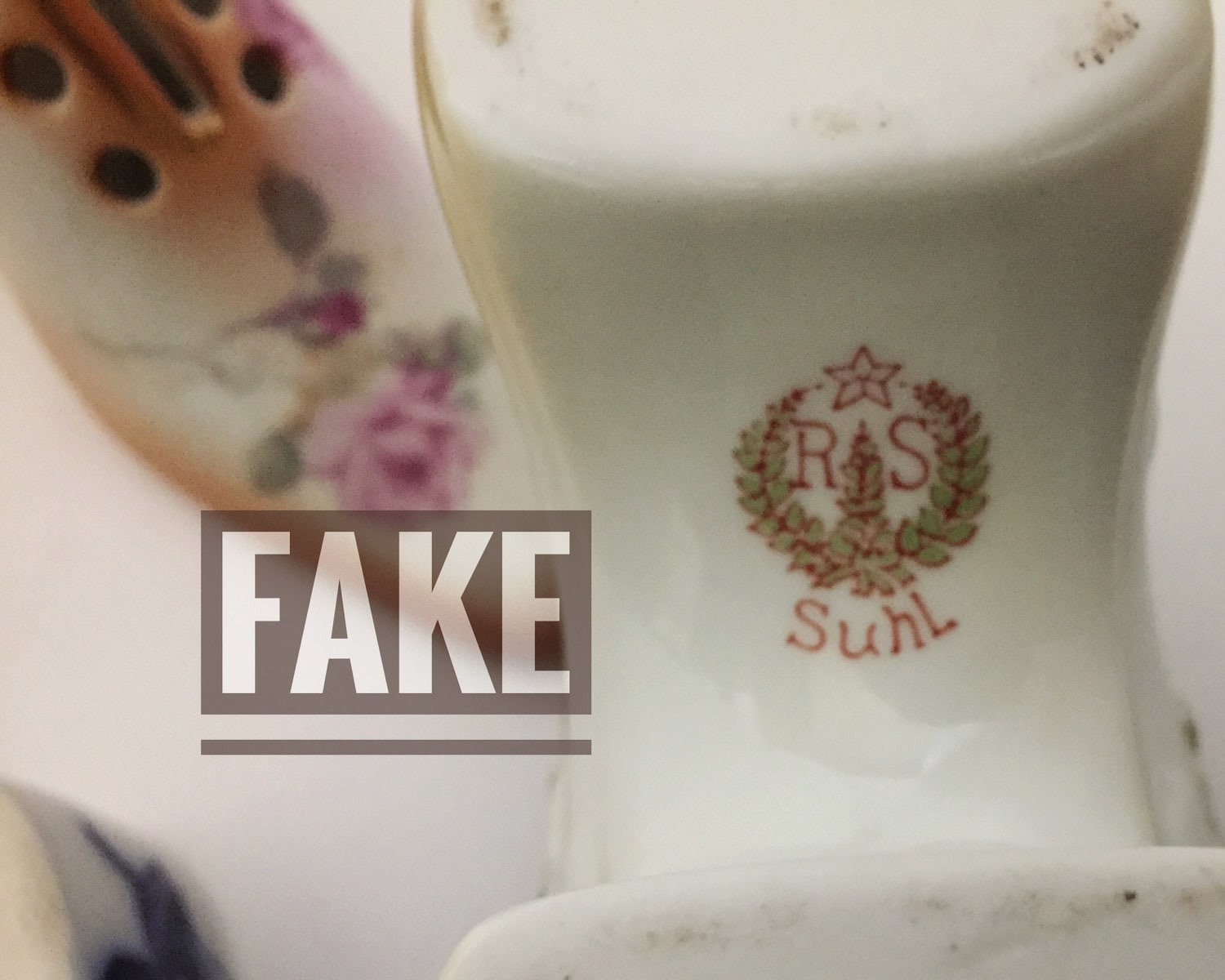 I had three choices: sell it as a repro (not my thing), sell it as real so I still made my tidy little profit, or don’t sell it. I choose not to sell it, and so it now often holds my steel wool at the sink. I accepted the loss, because that was the right thing to do. And my repro Sharon creamer wasn’t my only mistake. I have two R.S. Suhl and Prussia ceramic shoes that I invested in only to find out that they carried false marks. In this case they aren’t even reproductions so much as outright fakes – made to dupe the unwary. R.S. China can sell for a pretty penny, and is sought after by collectors. The fake back stamps are added to old pieces that look similar, or sometimes to reproduction pieces. 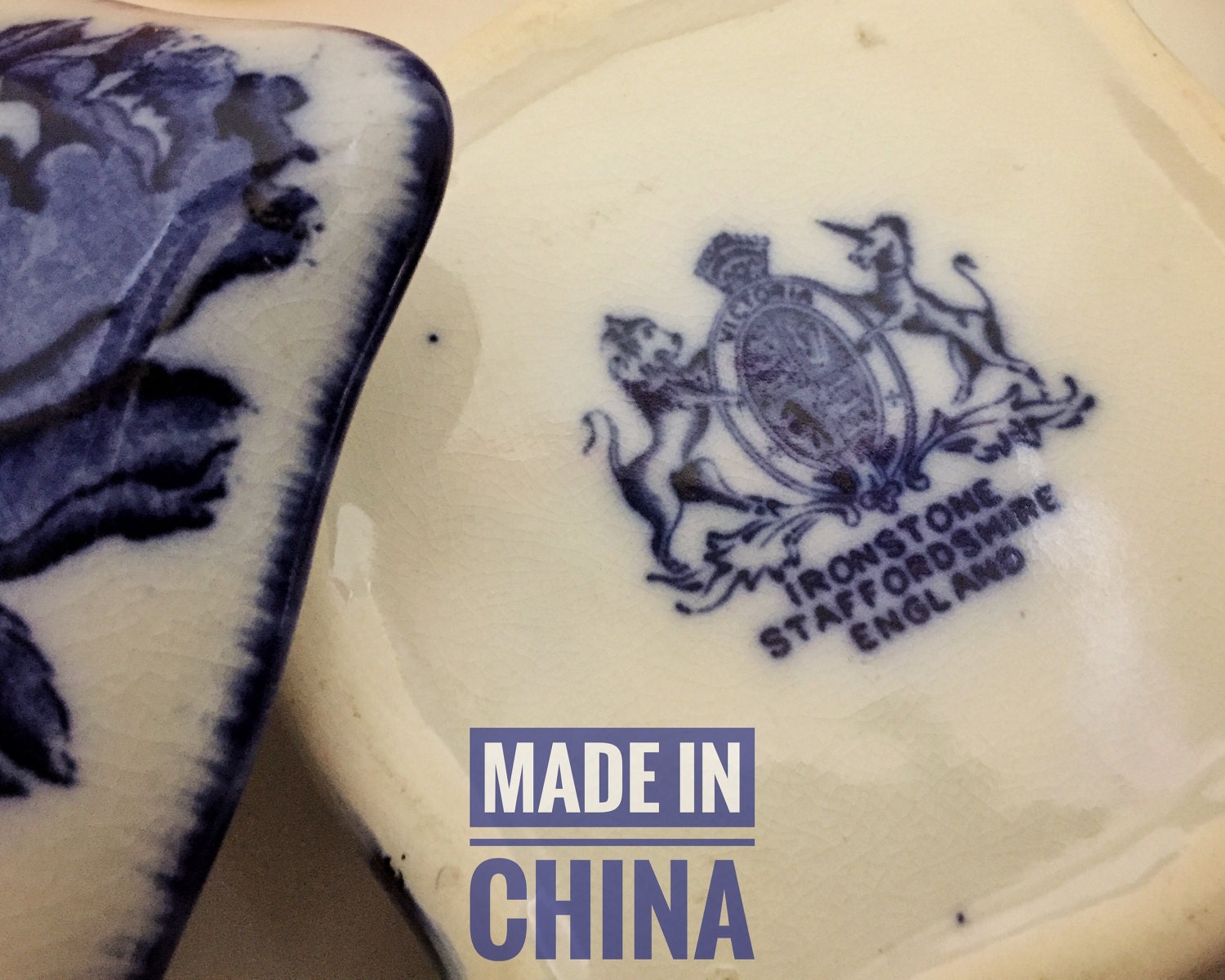 Another piece I picked up was a beautiful blue flow pottery box. I didn’t know anything about it, except that it was pretty, had a lovely authentic looking back stamp that proclaimed it made in Staffordshire, England, and I was pretty sure it had to be something nice. Wrong. This mark with the fancy lion and unicorn heraldic shield appears on imports from China. You’ll see them all over the internet being sold as authentic antiques. Too bad. They are pretty enough in their own right, but it’s a shame to have people duped into believing they are authentic antiques, and paying a premium for them.

It is vital, if you are collecting and authenticity is important to you, that you do your research. Online or in a brick and mortar store you can be burned. I’ll keep my pretty blue flow box and use it for trinkets, but I would have been pretty upset if I had paid a lot for it with an online merchant, or at my local antique store. Whenever I acquire a new piece I’m unfamiliar with I do my research so that I can be as sure as possible that the information I give my customers is accurate. Genuine mistakes get made, but the more educated you are, the better are your chances of avoiding them! And please remember, that just because a ton of sellers say the same thing about something it doesn’t necessarily make it true. When in doubt go back to the books and check with trusted experts